erstwhile
​in conjunction with the release of 'Top', we have asked many artists who knew and/or were deeply influenced by Peter to contribute words, and those will be added here over the next weeks and months, so please keep checking back.
​
​when our friend and inspiration Peter Rehberg passed suddenly in July 2021, I felt like I had to do something, and what I’m good at is something Peter deeply loved, producing records. so I put together this project with some of his longtime collaborators and friends, Lasse and Jérôme, Marcus Schmickler mastering and Tina Frank designing.

it’s titled Top for multiple reasons but one is that Top was often Peter’s entire reply to a message you’d sent, both concise and supportive. a second is that it can also be read ‘To P’, we miss you buddy. 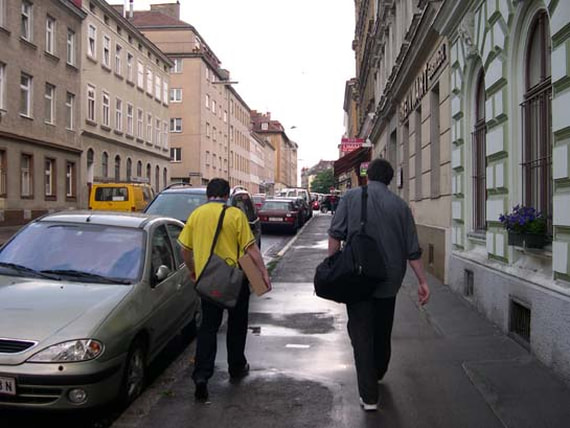 Pita and Jon Abbey on the way to Rhiz, Vienna, 2005
​​I still haven't come to accept that we're living in a world with no Peter Rehberg. His passing last summer was an absolute shock. It hit us all so hard. His music, the labels he ran, how he ran them, his knowledge and love for electronic music, his attitude, approach and work ethic. His influence in the three decades he performed, recorded and released music can not be overrated. He often tried to downplay it, but we all knew how much he meant. But most of all we'll miss his persona - that dry British sardonic humour mixed with genuine enthusiasm and endless generosity.

The last time I met him in Vienna he was appalled that I didn't bring records to trade and didn't have time to come visit his office ("What?? No product exchange??") He truly was a parameter for how electronic music was doing at any time. Now he has stepped out of time, and I don't know quite where that leaves us. My guess is he'd want us to keep making weird new music, so when Erstwhile asked if me and Jérôme would be up for recording a duo album in his memory it seemed the way to make sense of the way forward.

We discussed the qualities of Peter's music – his love for rhythmic pulse-oriented materal, icy drones, his anti-musician approach (which often results in the most interesting music, just stripped of vanity), his love for abrupt jump cuts and odd album sequencing. We decided to make the album in the same way he worked, to not multi-track or overly polish the material, just try to capture the ideas in their raw state and trust in them.
​
On my end I decided to use several old Macbooks, which all worked but had moody SuperCollider patches that only worked on those OS systems, with idiosyncrasies I had to relearn. I remember Peter saying he stopped working with laptops when they became too stable and reliable, and trying to create music on a nearly 20 year old Macbook in his honour, I understand what he meant. That the unpredictable element is crucial to the creative process. Now we suddenly have no Peter Rehberg, which seems like the hardest jump cut of all.

A long time collaboration as musicians inside or outside of MIMEO.

A long time social collaboration around beers and wine (before he stopped).

And even with this you realized you don't know the people so well.

I've always thought of Peter as a sort of ugly duckling who disrupts the established order only to reveal that he's much more than that, a genius of constantly evolving sound and limitless organisation. 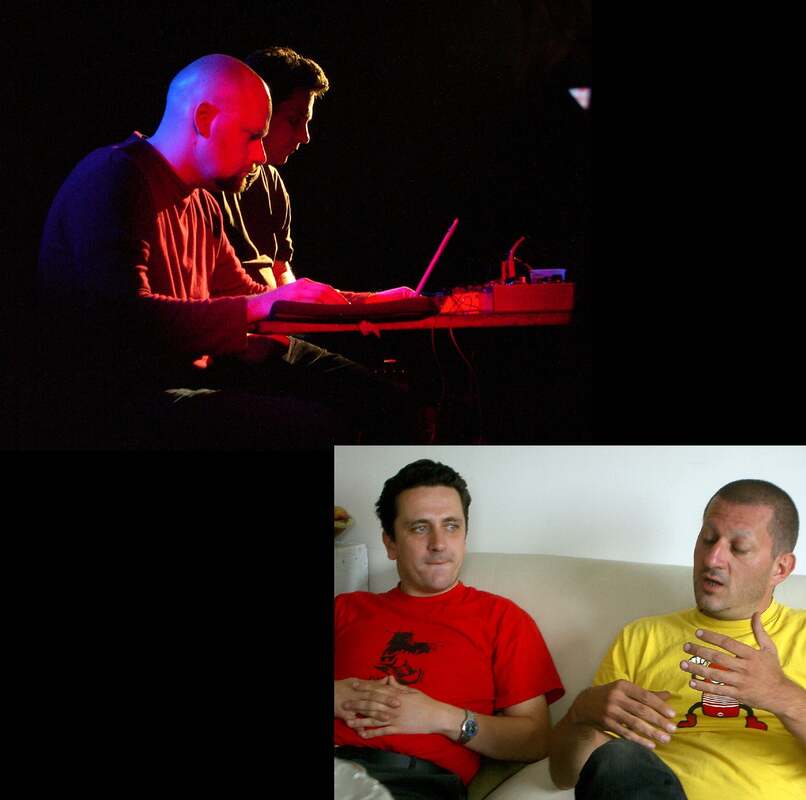 Lasse Marhaug and Pita (top), Pita and Jérôme Noetinger (bottom)
Whenever i made a cover design for Peter/ his music, i had an initial idea of how the final image had to correspond with the music. For example, a sound that wanted to be expressed visually or a certain process to generate an image asserted itself while trying out things.

On one Sunday morning, I found the right routine for this cover. The process, consisting of prepared images at the beginning, the route they travelled through the software, together with the filtering processes, created a variety of images that are all brilliant (in my opinion). You could hang them on a wall if you wanted to. But they all carry a little piece of Peter Rehberg in them. All are derived from snapshots of our last live concerts in 2021. You don't see that. But you might feel it anyway.

when i asked lasse about tea music he said that noise is his sweet snack for tea. this now reminds me that pita and other early mego releases were suggested to put under "dance music" label in music stores. that was a great time that some store staffs really did it, and some people really bought them and played as dance music. today i was having tea with lasse and jérôme's "top" from speakers again (i did this several times before and after the lunar new year). this music is a great physical existence which comes into mine, like tea. i mean physical vibrations. i can't eat it. but the noise finally meet the sugar, folic, vitamin and caffeine somewhere in my brain. that's what i call solid experience. if i dance i will produce similar materials in the brain.

this is an album dedicated to peter rehberg aka pita. since pita appeared i have tried hard to find new language to describe and review this kind of music. i thought a lot about avant-garde and experimental. but now i'd look back to what dance and snack and tea is to me. maybe avant-garde is about look back to these simple pleasure (or pain, to some others. or pain-kind of pleasure...). there are still a lot to talk about. such as structure, dynamic and balance, motive development, randomness and sharpness, and so on. and maybe neuroscience, too. i believe that the first thing is we don't have to use the same language applied to classical music. and in the best case it's not about aesthetics. i'm happy that these people are pushing languages, including computer languages and languages of tape and feedback, to the same solid and plain place that my cup of tea has brewed. my heart is dancing." 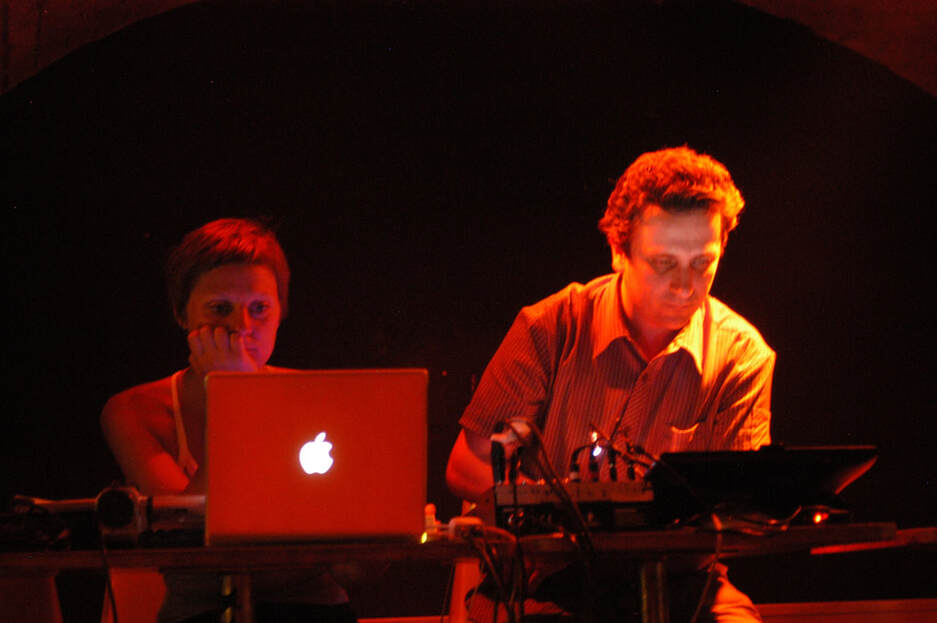 Pita and Jade (Michaela Schwentner), Rhiz, Vienna, 2005
​There is an understandable tendency after someone leaves for good, to speak about how lovely and beautiful this person was.
I cannot do that writing about Pita: it would be dishonest, and certainly it would not describe the impressions that I have after having shared some moments with him. He was too authentic and socially radical to fit in a one-sided nice picture.

I met Pita a few times over the years (10 or so...?), and for unfathomable reasons each time was, at least for me, a memorable situation: a couple of dinners with Mika Vainio or when we played together in a quartet with Keith Rowe and Gerard Lebik (maybe the quietest music he ever played and, to my surprise, he could play it so well) .

I met him at a Mika farewell dinner, with my friend Dirk Dresselhaus (Schneider), just the three of us, and last summer he was by the other side of the Spree River when I played one of the most personally significant concerts I ever played: this was just a couple of days before he left…

Strangely enough, all those encounters are like tattoos in my heart.

Pita managed a very successful label - probably, the most successful label in the field of electronic, experimental music- and also toured, played, and hung out with friends, most of them musicians.
Sometimes a label runner has to establish a certain distance with musicians, whose knowledge of the career-changing power to release a record in that particular label - certainly the case with eMego - could easily lead to some awkward social moments, unsolicited demands, ceaseless requests.
In perfect opposition to the hypocrisy that could eventually surround his life, where the boundaries between business and sociability are easily non-existent, Pita was radically honest: in each word, behavior and gesture.
And yes, this means that he could be harsh sometimes - he was, sometimes, with me -, but never I doubted his integrity and - most importantly - his humanity and affection, often shown through hilarious comments, or with the simplest gesture: just an eye contact which made me feel he was with me.

He made a joke once, telling me what a terrible instrument the saxophone is (yes, a classic among old school electronic and techno people). Afterwards, talking about my record with Mika, which he released, he told me that he had never heard before a saxophone being played as I did in that record. Probably the best review I ever had.

His personality is reflected in his label.
He was proud of running a non-funded label, in a continent where so much of avant-garde art exists because of national help, and he ran it mostly by himself and as a proper business venture, making it a monument in experimental arts.
In the music he released, I find a connecting theme, a feeling somewhat present in all the records: the rejection of sweetness and obvious beauty, and a harsh approach to life, but not one without hope, or without the trust that there will always be enough people to support and enjoy such radical and strange music. This knowledge led him to make eMego into a huge creature, which could move out of the underground without losing, ever, its spirit and never becoming a mainstream thing.

Once I asked him: - Pita how's your relationship with Jon Abbey? -
- It is very good - he replied - But he keeps on asking me why the record that Kevin Drumm made with Axel Dörner on Erstwhile does not sell as well as Sheer Hellish Miasma -
- And what do you answer him? -
- I answer him: well… -

By the end of the set that I played that day by the Spree, I went to the other side of the river to say hi to Pita and other friends, and there's this woman that always comes after all the open-air concerts there, complaining: she says that we sound like machines, that we should do happier music, and then she left. Pita looked at me, then at the river, at some kind of imaginary horizon.

- Next time you should book Whitehouse -

​he said, and then he left with Laura.

— ​Lucio Capece
​Peter was a singular artist, with a strong musical compass, draw a straight line and he would follow it. Peter also had a way of finding the best word to describe a sound, I recall in the early days of MIMEO where during live performances the new generation of Powerbook performers would connect live to the internet, very often the connection would drop, restoring the connection would feature the characteristic modem dial-up sound, which Peter termed as “Harsh”. this for me was the perfect term, and Peter’s concept of “Harsh” to this day became an important concept for me. 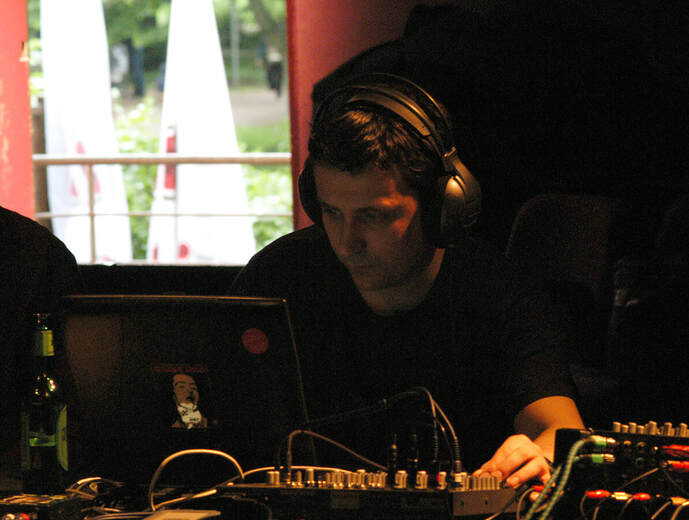